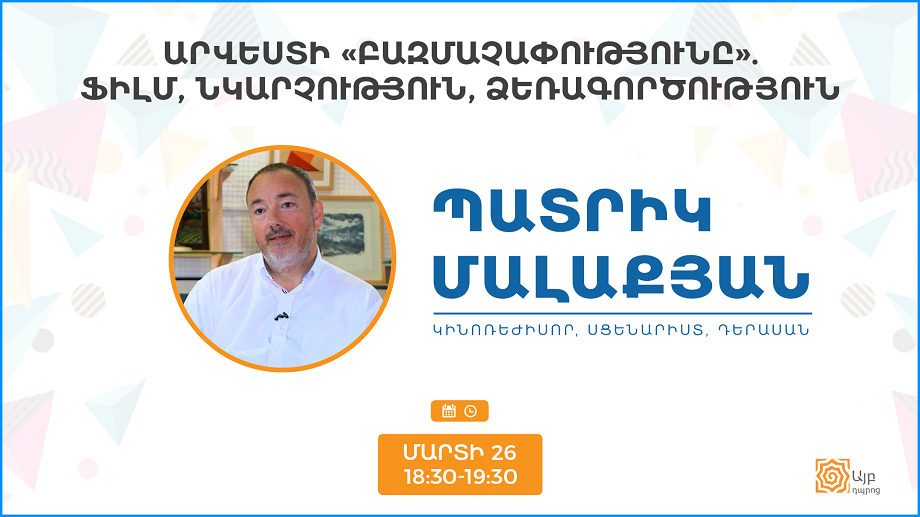 Ayb School career orientation department initiated an online meeting with filmmaker, scriptwriter and actor Patrick Malakian, whom many know as Henri Verneuil’s son. Mr. Malakian talked about multifacetedness of the art and presented his vision for combining art and science.

At the beginning of the meeting, he told what binds him to Armenia and said he is delighted to see so many art loving children here. “I feel the spirit of art that inspires the young minds.”

Asked whether Mr. Malakian followed the example of his father to become a filmmaker, he said his parents certainly had a role in his choosing of a career, but he would never choose this path if it were not his love for writing and telling stories. “Art is the freedom that can never be taken from us,” he says.

There a lot of school students, who are interested in various kinds of art but can’t make the choice. “A sculptor doesn’t make films, but when he looks at his sculptures he sees a beautiful film. An artist never writers books but when painting he tells a story. When I write a script, I listen to music. And my writing will depend on the music I hear,” Mr. Malakian says, as if hinting that art is an integral whole, irrelatively of what exactly you are in. Studying arts is a long process when you try a lot of things to finally understand what you like most of all.

Asked whether art and science are combinable and what’s the difference between them, Mr. Malakian referred to a very sensitive issue – the parents’ pressure on their children when they are choosing a career. “Parents must understand that they should support their kids but not take decisions instead of them.”

When choosing art, some young people are afraid that they will not be able to earn enough money. However, according to Mr. Malakian, the difference between art and science is that the art makes people feel and express themselves. Of course, one can practice both art and science. It all depends on the spirit and will.

Patrick Malakian initiated establishment of an arts school in France that will operate on weekends not only for children but also for adults and elderly people. “I often visit nursing homes and understand that art can be a tool to awake people’s thoughts and make them more self-confident,” he says.

To complete the meeting, Mr. Dalakian told an emotional and beautiful story. When Patrick showed the script of his first short film to his father, Henri Verneuil, the latter advised not to shoot the film. Nevertheless, Patrick decided not to follow the advice and shoot the film. When the film premiered, everyone was waiting for the father’s feedback. He said, “I was wrong, and you were right, my son. I thought you wanted to do the impossible but you succeeded.” Thus, the world learned about a short movie by Patrick Malakian.

Tracing the lost treasures of Artsakh